Review: Picture Us In The Light by Kelly Loy Gilbert // a new favorite (that made me cry?!)

I don’t know how to even start this review.

Every time I try to express my love for this book, to even think about it, my eyes fill up with tears because of the sheer impact it has had on me.

I don’t know how to even begin to explain the deep wound it grafted in my heart, the heaviness that has settled on me after reading Danny’s story — so I apologize if my review is all over the place, because that’s exactly what my emotions feel like right now.

But I hope to succeed in convincing you to pick this up today, because if you take anything from my review, it’s that Picture Us In The Light is a gorgeous book and I loved it so, so much.

Before I get started, please use these resources to support everything going on in the world right now; remember to always show your support, even when social justice isn’t “trending.”

Here is a masterlist of everything going on in the world and what you can do to help.

Picture Us In The Light by Kelly Loy Gilbert 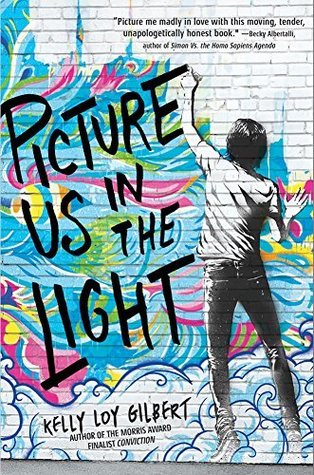 Publisher: Disney Hyperion
Date Published: April 10th 2018
Genre: YA Contemporary
Danny Cheng has always known his parents have secrets. But when he discovers a taped-up box in his father’s closet filled with old letters and a file on a powerful Silicon Valley family, he realizes there’s much more to his family’s past than he ever imagined.
Danny has been an artist for as long as he can remember and it seems his path is set, with a scholarship to RISD and his family’s blessing to pursue the career he’s always dreamed of. Still, contemplating a future without his best friend, Harry Wong, by his side makes Danny feel a panic he can barely put into words. Harry and Danny’s lives are deeply intertwined and as they approach the one-year anniversary of a tragedy that shook their friend group to its core, Danny can’t stop asking himself if Harry is truly in love with his girlfriend, Regina Chan.
When Danny digs deeper into his parents’ past, he uncovers a secret that disturbs the foundations of his family history and the carefully constructed façade his parents have maintained begins to crumble. With everything he loves in danger of being stripped away, Danny must face the ghosts of the past in order to build a future that belongs to him.

Picture Us In The Light follows Danny Cheng, a Chinese 18-year-old who has his life set ahead of him. He’s in his senior year of high school with a scholarship to RISD and is planning on pursuing art, his passion. But all of that changes through an intricate series of events that follow one after another and end up altering his life forever.
I’ve decided not to talk too specifically about what occurs in this book today, especially because it unfolds almost like a mystery, and I would hate to spoil its beauty for you. However, there are so many other elements I adored of Picture Us In The Light, starting with the first thing that drew me into it: Kelly Loy Gilbert’s beautiful, poetic prose.
While it wasn’t flowery or overly descriptive, it had a magical fervor that simply demanded attention. I found myself wanting to highlight so many of the paragraphs because they were effortlessly beautiful and read like a quote I wanted engraved in my mind forever.

“And maybe life is when you gather all the things you can hold on to and carry with you, and cross your fingers it will be enough.”

I also appreciated the characters so, so much, especially the protagonist Danny. His inner conflict and thoughts were slowly revealed, and it was so heartbreaking yet powerful to read about his growth, his insecurities as an artist and just as a person, and his frustration with how everything was unfolding in his life!
You could tell that Danny was an artist through the quiet observations and thoughts he made about the world around him, and his character voice was fleshed out so well. His thoughts were all so understandable, so real that I found myself rooting for him throughout the novel, whether he made good decisions or not.
Honestly, what made all of the characters in this so special to me was that they were human. They made mistakes, they had their low moments, and it made me love them even more for it. And as an Asian teen, Danny’s friend group and the cast of (almost) all Asian characters warmed my heart!
Speaking of friendships, the way Danny’s friend group was depicted made me so happy. All the side characters were three-dimensional and the flashbacks about their friendship sprinkled in throughout made me understand and love them even more.
While there was also a romantic subplot between Danny and his best friend Henry (best-friends-to-lovers my heart!! 🥺), I found myself loving how it only had a small role in the story — the focal point of Picture Us In The Light was Danny’s growth as a character, how he learned so much about everything around him and found a space of his own to fit in.
Much of this book revolved around family as well, and it was wonderful to see how Danny’s relationships with his parents were a prevalent part of the story. Many of the things his parents did were questionable, but it was all out of love and it was awful to read about the struggles they had to go through as immigrants to America.
(I would have included much more about the family relationships Gilbert explored, but like I said… spoilers!!)
I will always admire the way the author portrayed emotion, too — not just the strong, persisting feelings (which are always beautiful in their own way) but every different kind of emotion: the feelings that dig into your side like thorns, the distant throb of past grief, and the stark heaviness of sharing a burden like a secret.
I’m not sure I’ve mentioned this on my blog before, but I almost never cry while reading a book. (which is sometimes a good and sometimes a bad thing??) I’ve definitely teared up while reading before, but I can’t remember the last time I shed tears over fictional stories… which is why it came as a shock to me that Picture Us In The Light was able to make me cry: multiple times.
There was just something so special about the story Kelly Loy Gilbert had woven, something so delicate about the characters and emotions portrayed that allowed me to confidently state that this is one of my favorite books.
This novel ended quite abruptly, but I think that’s what the author intended in order to bring in a sense of reality, and also to allow the reader to let Danny’s story dwell in the reader’s minds for a little longer. And that’s exactly what happened to me: even a few weeks after finishing it, I still find myself thinking about it.
It frustrates me that more people have not picked it up — if you enjoy heartwrenching contemporaries, complex family and friend relationships, a soft romance that doesn’t take over the main character’s development, or simply the joy of reading an utterly beautiful and poignant story (i’m sorry but who doesn’t want any of these things??), you need this in your life now!

“Or maybe we all just forgive the people we love, because we love them, and for no other reason than that.”

Although there’s so much more I could talk about, I’m ending this review here along with an aesthetic I created that (I hope) captures the essence of the book. If my review hasn’t convinced you to read this, I hope this can!

40 responses to “Review: Picture Us In The Light by Kelly Loy Gilbert // a new favorite (that made me cry?!)”