ARC Review: The Jasmine Throne by Tasha Suri // A Rich, Well-Crafted Start to a New Series

A powerful beginning to a new fantasy series, The Jasmine Throne showcases the complexity of empire and the monstrosity and power of women within it.

This adult fantasy book featuring morally grey sapphics set in an Indian-inspired world was one of my most anticipated 2021 releases; I fully expected to rate it five stars! And while a few aspects (sadly) disappointed me, I was still able to enjoy the book as a whole.

The Jasmine Throne begins with a prologue that sets the rest of the story into place, thrusting the reader into the Indian-inspired empire of Parijat. Soon, we meet the two main characters—Malini and Priya. Malini is a princess who refused to burn on the pyre—a ritual meant to purify and immortalize women in Parijat. Exiled by her own brother to an ancient temple, the Hirana, she stays there as a consequence, being forcibly weakened through doses of poison. Priya is a maidservant who harbors a dark past. She is a temple child from Ahiranya, the nation that was colonized by the empire of Parijat, and possesses powerful magic she must hide. Every day, she battles an internal desire to embrace the roots and culture that has been completely wiped out by Parijat.

So while the backstories of these two women couldn’t be more different, they both have the same core: a fear of being ‘monstrous’ in a world where they are treated lesser, and a burning desire for power that drives them to break out of that. And once they meet in the Hirana, their fates intertwine to form a power that just might be enough to destroy the empire of Parijat.

These characters are crafted so well, and I love how they grow to embrace every part of themselves, even the ones that their society has deemed as monstrous. I also loved that, instead of just Malini and Priya, there are so many different perspectives the reader can experience. There is Bhumika who, just like Priya and Malini, is tired of the relentless misogyny in her world. But unlike Priya and Malini, her character demonstrates quiet power: how being powerful doesn’t always mean grand gestures, it can also be be cultivated through the smallest things. The perspective of Bhumika and a few other characters adds depth to the story and plot, allowing the reader to wholly understand.

Speaking of depth, the worldbuilding in The Jasmine Throne is so well done. Suri has created a world complete with different cultures, histories and magic, and knows how to expertly reveal it to the reader. Not everything is presented all at once; the details unfold in layers, so it’s easy to be learn more without being overwhelmed. And the best part of it is the author’s luscious prose, absolutely perfect for an adult fantasy novel like this one. Through Suri’s descriptive writing, I could feel myself in the Hirana, visualize the magic, and see myself on the streets with the characters.

The only two things that fell flat for me in The Jasmine Throne were the pacing and romance. I know that this is the first of a trilogy, but still—most of this book felt like a setup for the true plot. I found myself wishing there was more going on at many times in the story; the plot felt like it was dragging in the beginning and middle. And I typically don’t mind reading longer books, but because I didn’t enjoy how this one was more of a build-up, it took a quite while for me to finish The Jasmine Throne. I think my qualms with the romance also tie into my disappointment with the pacing, as I wish the romance had gotten more development rather than just being a build up. I absolutely love Priya and Malini as characters on their own, but I didn’t find myself rooting for their romance as much as I would have liked.

To conclude, if you enjoy well-crafted adult fantasies with feminist themes and are willing to overlook the slow pace, this is the book for you! I’m definitely excited for the next installment in this series to see where the author takes these morally grey sapphics next. 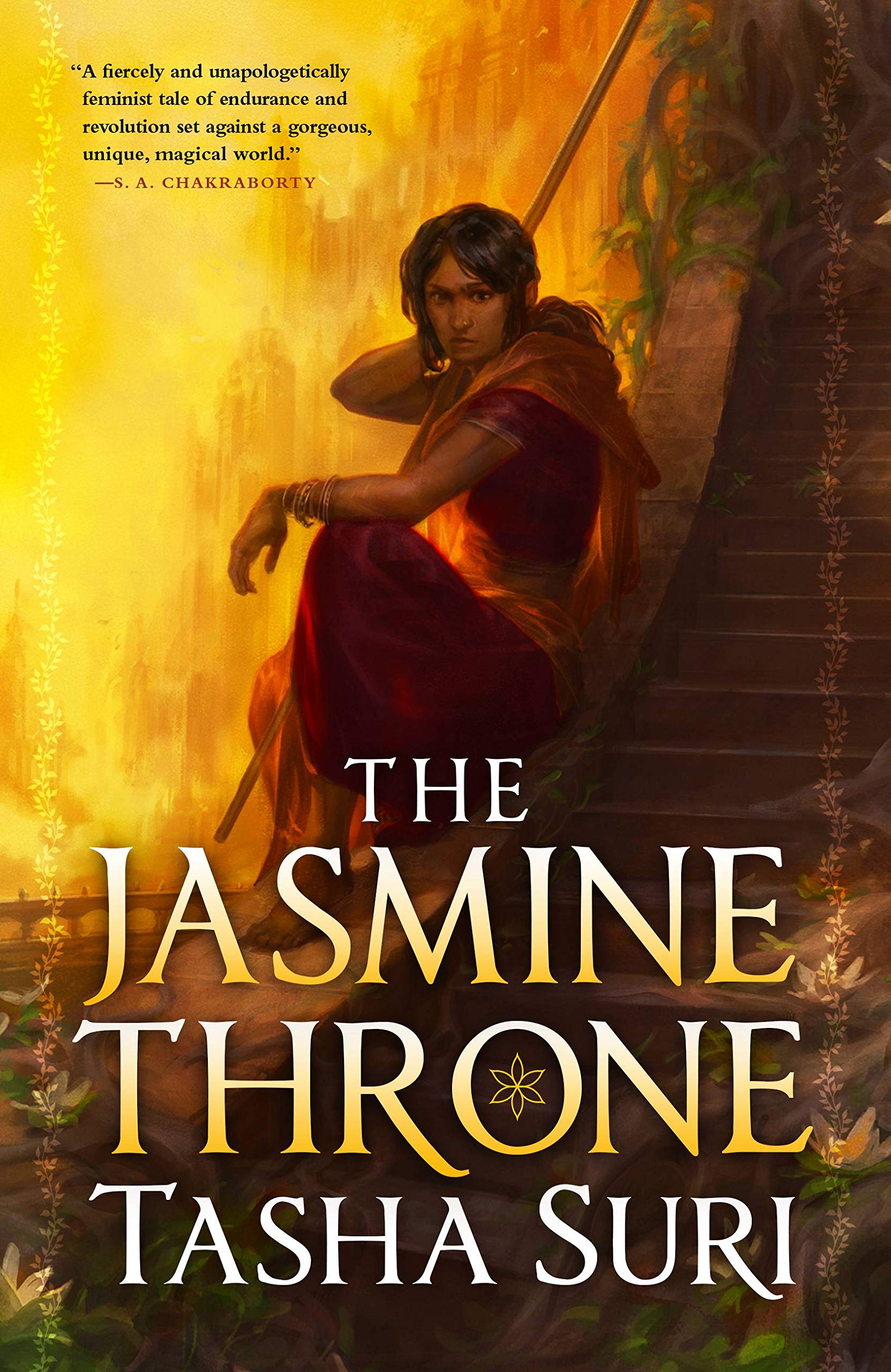 Author of Empire of Sand and Realm of Ash Tasha Suri’s The Jasmine Throne, beginning a new trilogy set in a world inspired by the history and epics of India, in which a captive princess and a maidservant in possession of forbidden magic become unlikely allies on a dark journey to save their empire from the princess’s traitor brother.

Imprisoned by her dictator brother, Malini spends her days in isolation in the Hirana: an ancient temple that was once the source of the powerful, magical deathless waters — but is now little more than a decaying ruin.

Priya is a maidservant, one among several who make the treacherous journey to the top of the Hirana every night to clean Malini’s chambers. She is happy to be an anonymous drudge, so long as it keeps anyone from guessing the dangerous secret she hides.

But when Malini accidentally bears witness to Priya’s true nature, their destinies become irrevocably tangled. One is a vengeful princess seeking to depose her brother from his throne. The other is a priestess seeking to find her family. Together, they will change the fate of an empire.

Thank you to the publisher for providing me with an ARC in exchange for an honest review! This did not affect my opinions in any way.

8 responses to “ARC Review: The Jasmine Throne by Tasha Suri // A Rich, Well-Crafted Start to a New Series”